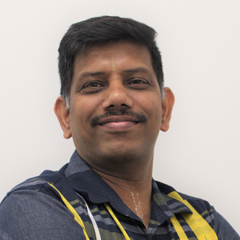 Siva graduated with his Bachelor’s Degree in physiotherapy from the Tamilnadu Dr. M.G.R. Medical University in Chennai, India in 1999 and completed his Masters in Sports Therapy at Guru Nanak Dev University, Amritsar, India in 2002. He has worked in private practice and multi-specialty hospital settings and private physiotherapy schools in India for more than a decade providing him with valuable experience in multiple areas of practice. Before joining the team at Pro Motion Physiotherapy, he worked at CBI Fleetwood Surrey Center and Vital Life Physiotherapy Clinic treating Work Safe BC clients.

Siva is a member and in good standing with the Physiotherapy Association of BC (PABC) and is committed to enriching his professional knowledge through education. He recently completed (2019) his diploma in dry needling from the Functional Dry Needling Institute of UK ; his Level 1 in Fascial Manipulation with the Registered Therapists of Fascial Manipulation®; his level 1 and 2 in Vestibular rehabilitation with Mr. Bernard Tonks; and his level 1 in Functional Biomechanics with Dr. Jay Grossman

Siva has worked in various provinces in North India namely Punjab, Haryana, Chandigarh, Gujarat and Karnataka, and as such, he is fluent in communicating in various Indian languages such as Tamil, English, Hindi, Saurashtra, Malayalam,Gujarati and Punjabi. He treats his patients with empathy, dignity and respect, and encourages a return to activity through exercise and education.

In his spare time, he reads Hindu scriptures, visits temples and enjoys spending time with his wife and kids.